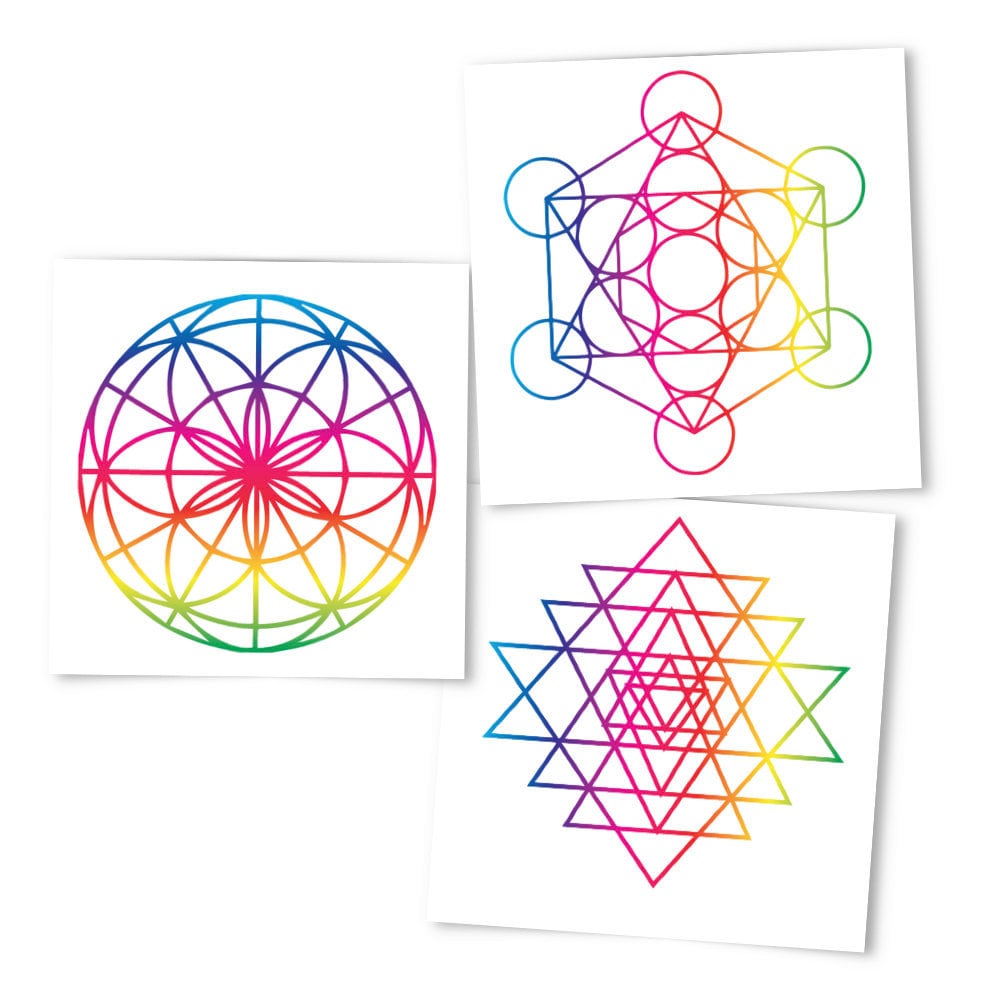 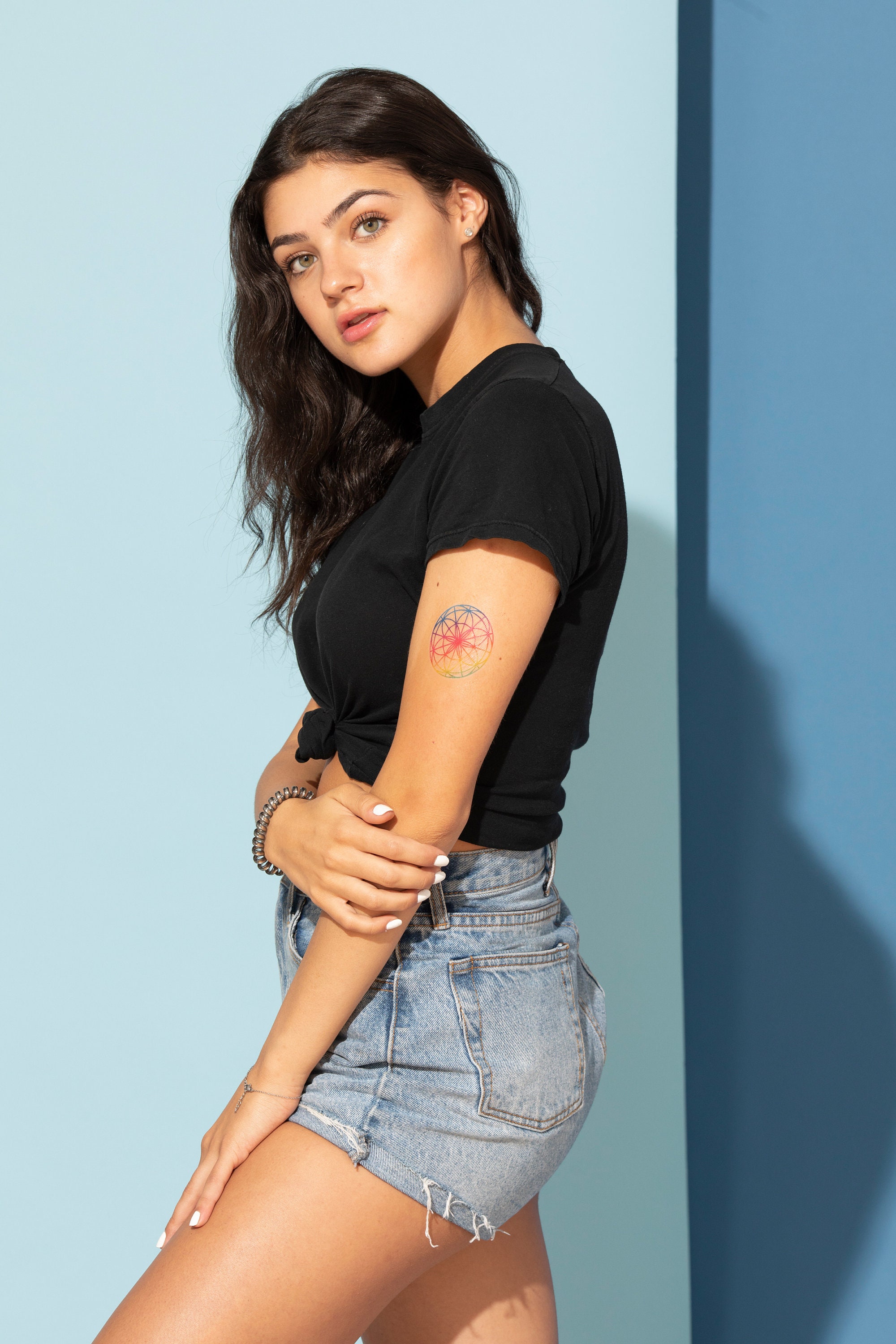 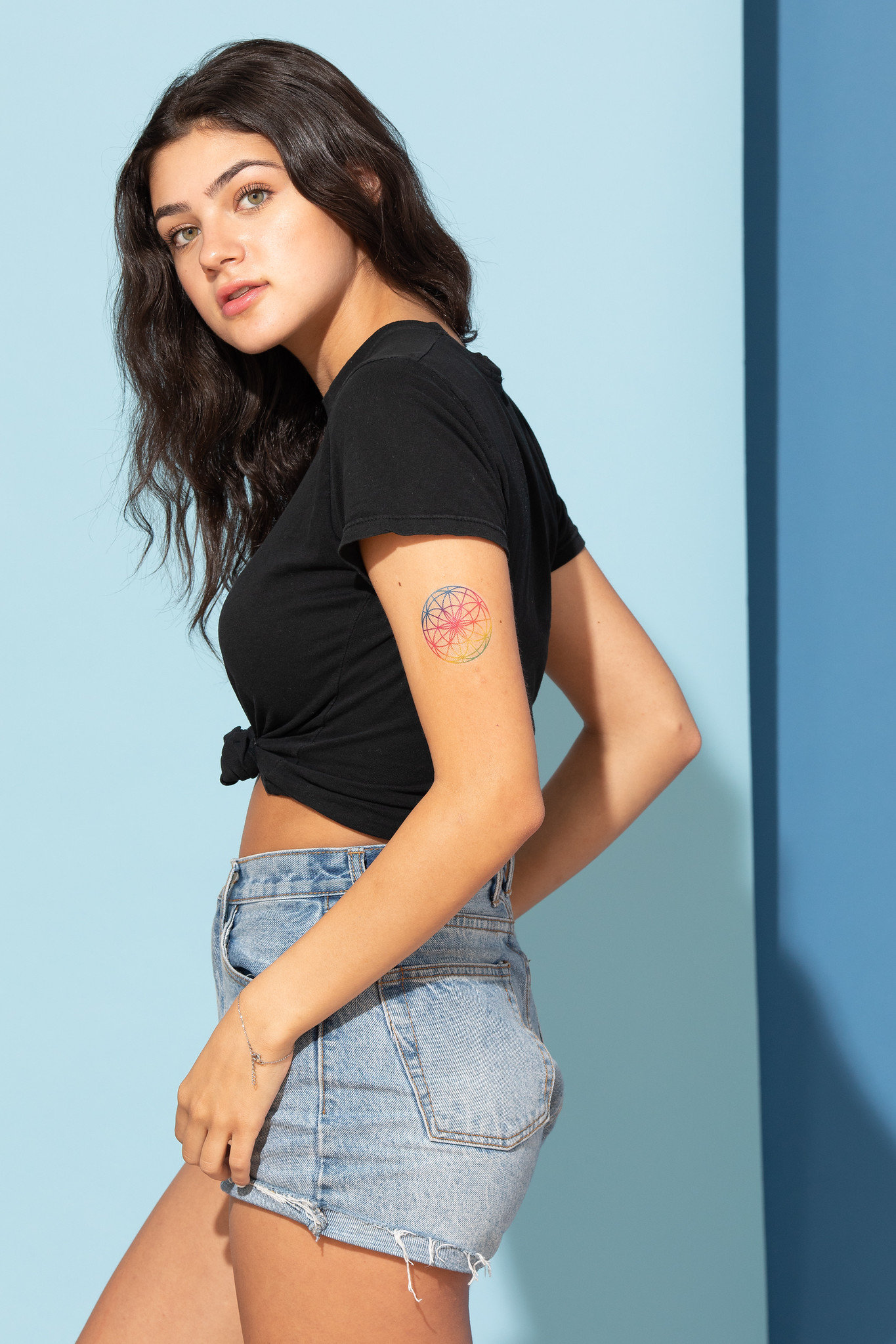 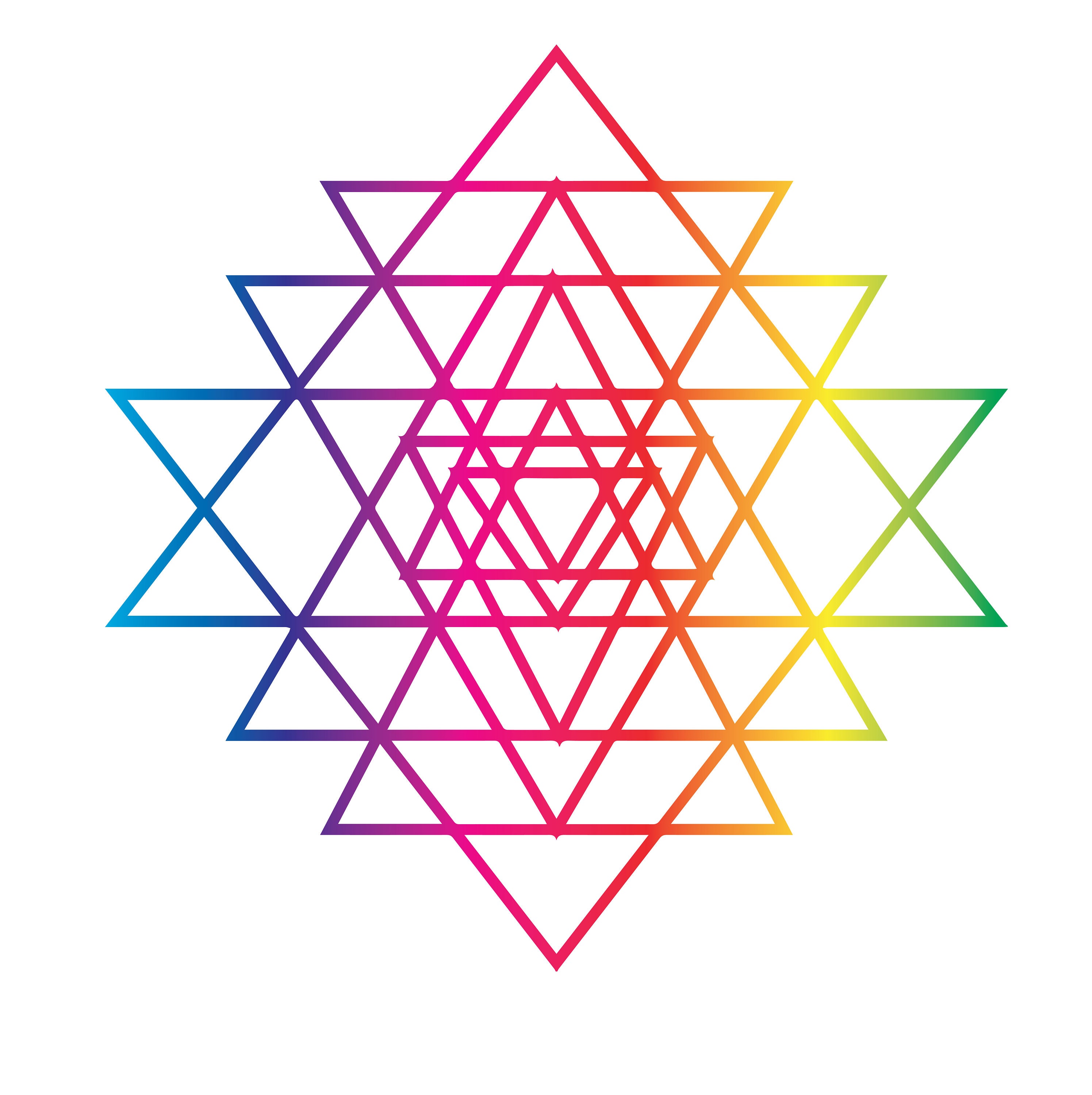 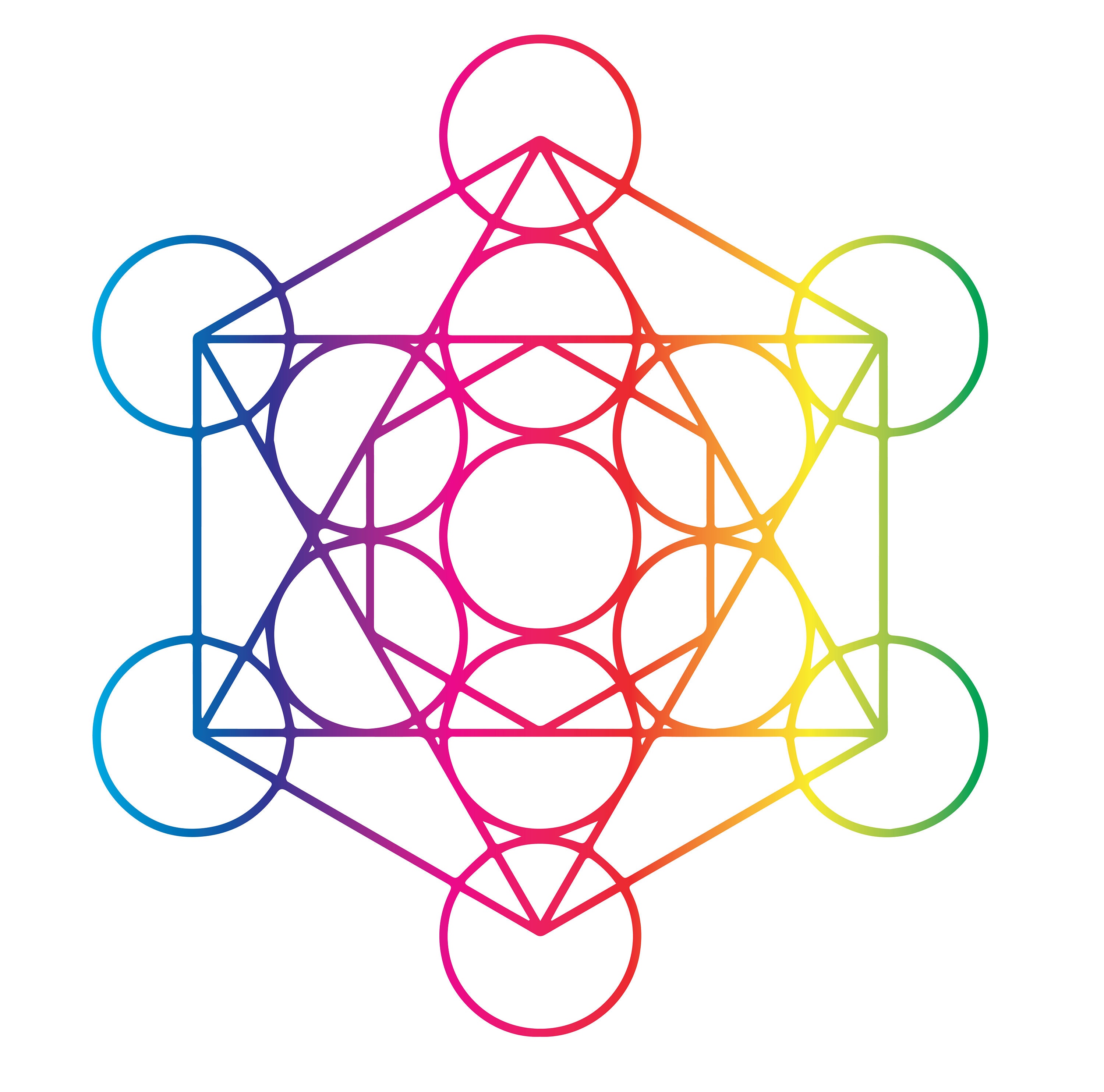 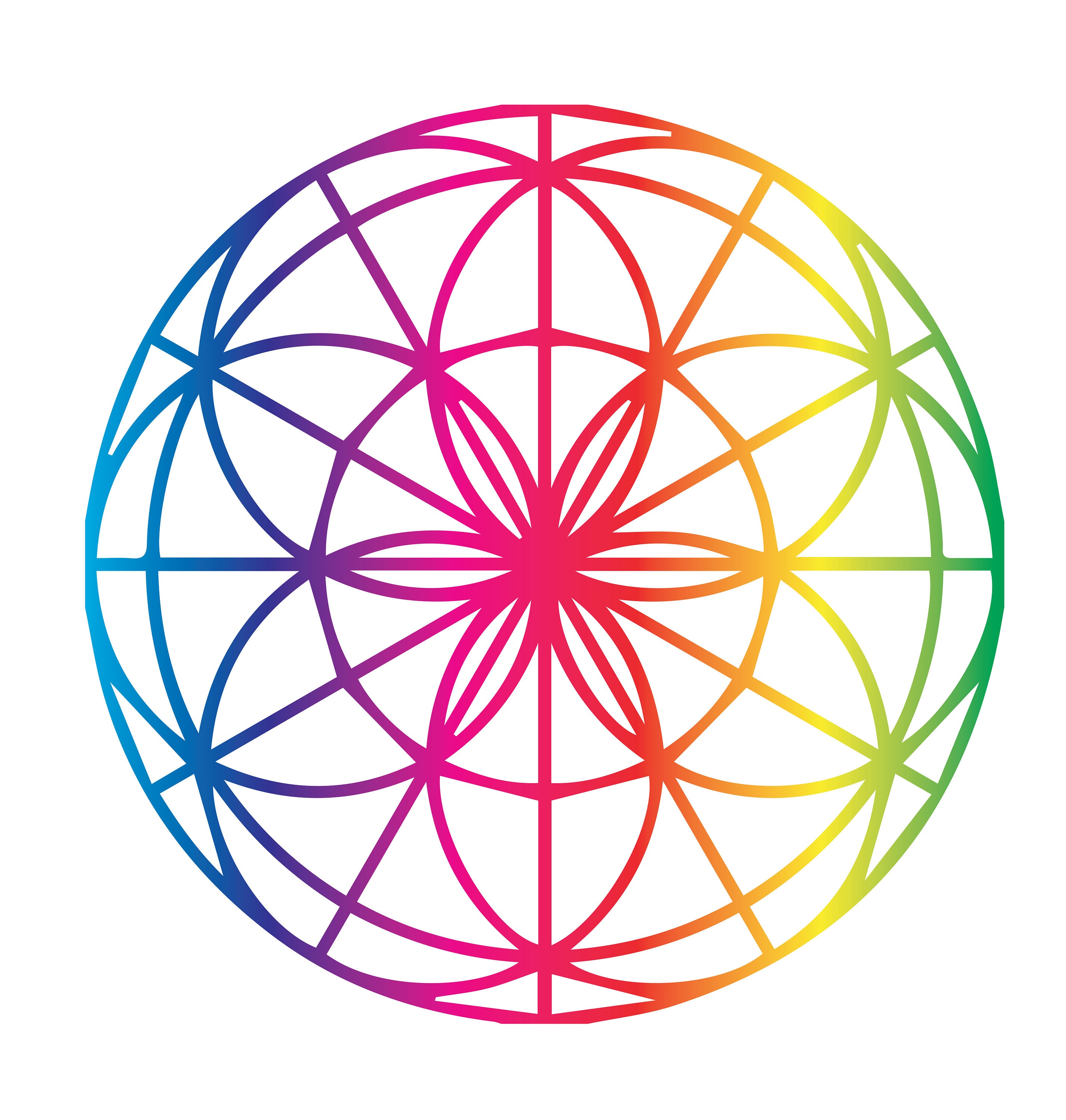 Pack includes 2 temporary tattoos of: the Seed Of Life, Sri Yantra and Metatron’s Cube. Pack includes six tattoos in total, so you can mix and match!

** Metatron's Cube is an ancient figure in sacred geometry, to ward off demons and satanic powers. It is often drawn around an object or person.

** The Sri Yantra, or Sri Chakra, is a geometric image from the Tantric traditions of Hinduism in India that represents the cosmos and the human body. The triangle-based image is used as an aid to meditation and to worship deities. The upwards-facing triangles represent the masculine, while the downwards-facing triangles represent the feminine. The central dot is the starting point of contemplation and meditation.

** The Seed of Life is an ancient geometric figure that consists of seven overlapping circles with the same diameter. It's a symbol of creation: seeds are magic, potent vessels of nature. The 7 circles within the Seed of Life mirror our chakras.

** Sacred Geometry involves sacred universal patterns used in the design of everything in our reality, most often seen in sacred architecture and sacred art. The basic belief is that geometry and mathematical ratios, harmonics and proportion are also found in music, light, cosmology.

We've incorporated the colors of the rainbow into these designs!

Can last up to 7 days on skin.

Each tattoo has a diameter of 2.5”

I'll do my best to meet these shipping estimates, but can't guarantee them. Actual delivery time will depend on the shipping method you choose.

I gladly accept returns and cancellations

Ship items back to me within: 30 days of delivery

Request a cancellation within: 0 hours of purchase

But please contact me if you have any problems with your order.

The following items can't be returned or exchanged

Because of the nature of these items, unless they arrive damaged or defective, I can't accept returns for:

We do personalized orders. Two options are available:
(1) a single digital design or temporary tattoos;
(2) 25 temporary tattoos of retail grade for US$5 a square inch. In other words, the price will depend on the size of the tattoo. For example, a 2 inch x 2 inch tattoo would cost US$20 for 25 copies.

When applying our temporary tattoos, we highly recommend you wipe the application area of with alcohol first and let it dry. This is because any form of oil, lotion and dust may affect the transfer of the tattoo. We want your transfer to be the best it can be! If alcohol isn’t readily available, washing the area with wa don't have alcohol in proximity, wash with soap and water and let dry.
Finally, soak the paper to the point it is translucent. More water is better than not enough.

To remove, slowly wipe the area with a cotton pad soaked in vegetable oil or alcohol. Paper towels also work. The oil or alcohol will dissolve the tattoo in a minute or two. Rubbing harder will not accelerate the removal process and will only irritate your skin.

We offer wholesale for any of our products. If you want large quantities, send us a message through Etsy. The delivery time may be longer depending on the quantity. Although, the longest lead time to ship is 7 business days.

Love them. They are so pretty.

Tattoos were nice but the store forgot to ship the complete order so I had to wait an additional week and a few days for the complete order after I contacted the store. They did apologize, and I get humans make mistakes but it still doesn’t make it right because if I didn’t contact them, I am not sure if I would have gotten my full order.

0 items in your cart